Staphylococcus aureus is Gram-positive, non-spore forming, non-motile commensal and opportunistic pathogen. In this study 66 S. aureus were obtained from170 samples of raw chicken meat and its ready-to-eat (RTE) chicken products. On In vitro antibiogram study of all the isolates of S. aureus against 16 different antimicrobials revealed S. aureus isolates showed resistance to tetracyline (67.6%), lincomycin (51.5%), erythromycin (48.4%) and ceftazidime (43.9%) and isolates were sensitivity to vancomycin (95.4%), ceftriaxone (92.4%), cefalexin (87.8%) and amoxicillin (83.3%). MAR (Multiple antibiotic resistance) index of various isolates indicates an overall range from 0.06-0.56 where in raw chicken meat and ready to eat (RTE) chicken products range varies from 0.06 to 0.56 and 0.06-0.37, respectively. Maximum isolates of S. aureus were resistant to one (25 isolates, MAR index 0.1) followed by resistance to 3 antibiotics (19 isolates, MAR index 0.3), resistance to 2 antibiotics (11 isolates, MAR index 0.2). In conclusion, the study revealed that the chicken meat and meat products in the study area were contaminated with S. aureus which indicates poor hygienic practices in slaughter house and retail outlets, further antibiotic resistant strains in raw chicken meat and especially ready-to-eat (RTE) chicken products are indicative of safety risk at consumer level.

Food poisoning represents a major source of illness and loss of productivity in many developed countries (Scallan et al., 2011). Of particular concern in recent years are outbreaks of food poisoning associated with enterotoxin produced by S. aureus, E. coli O157:H7 or L. monocytogenes, many of which have been associated with consumption of animal origin products. However, accurate data for the estimation of poultry meat borne infections are relatively lacking in India, especially in Madhya Pradesh. This may be due to lack of awareness and resources for diagnosis, documentation and reporting system. So, keeping these points in mind, the present research work was envisaged to observe antimicrobial susceptibility   and MAR index of S. aureus isolates.

A total of 170 samples including 100 raw chicken and 70 chicken products consisting of chicken samosa (10), chicken pattis (10), chicken momos (15 fried and 15 steamed), chicken barbeque (10) and chicken tikka (10) were collected from different retail outlets in Jabalpur city. The samples were collected in properly sterilized polythene bags and transferred to laboratory in chilled condition for bacteriological examination on ice and stored at 4°C till further processing. All samples were processed for isolation of S. aureus within 24 hrs of arrival in the laboratory. (Agarwal et al., 2003).

The in vitro antibiogram of S. aureus isolates against 16 different antibiotics was determined by disc diffusion method of Bauer et al. (1966) on Muller-Hinton agar (Hi-Media). A loopful of the growth from slant was inoculated in brain heart infusion (BHI) broth and incubated at 37°C for 3 to 5 hrs. A sterile cotton swab was dipped into the broth culture and excess of the bacterial suspension was removed by pressing and rotating the swab against the inner walls of the test tube. Streak was applied thrice across the entire agar surface and the plate was being turned for 60° between each streaking. The surface of pre incubated and sterile Mueller-Hinton agar petriplate was kept at room temperature for 30 min to allow the inoculum to be absorbed on the surface. Antibiotic sensitivity octadisc (Hi Media Ltd, Mumbai, India) were placed with the help of flamed forceps on the plates. The plates were incubated overnight at 37°C (Fig. 1). The results were interpreted according to the instructions of the manufacturer.

The antibiotic resistance is an emerging public health problem worldwide. The resistance in pathogenic bacteria is generally contributed by indiscriminate and injudicious use of antibiotics in the treatment of animals and humans. This problem is now becoming menace due to multiple drug resistance (Chatterjee et al., 2009). Over the last few decades, S. aureus strains resistance towards methicillin and vancomycin are gaining importance because of bacteria intrinsic virulence, ability to cause a diverse assay of life threaten infections including nosocomial or community infections and its capacity to adopt to different environmental conditions (Shrestha et al., 2009). Therefore, there is a need for continuous evaluation to develop strategies to control the multidrug resistance problem. The present study of S. aureus antimicrobial resistance/ sensitivity in chicken meat and chicken meat products (ready to eat) revealed sensitivity to vancomycin, ceftriaxone, cefalexin and amoxicillin and resistant to tetracycline, lincomycin, erythromycin, ceftazidime and chloramphenicol. Isolates revealed overall range of MAR index from 0.06-0.5 with 0.06 to 0.56 and 0.06-0.37 for raw chicken meat and ready to eat chicken products (RTE), respectively.

The study by various workers revealed widespread multi drug resistance problem against several antibiotics for the strains of S. aureus, Naik et al. (2009) observed high resistance against ampicillin, penicillin and tetracycline and recorded high sensitivity against amikacin and ciprofloxacin while, Hoerlle et al. (2009) observed 100% susceptibility to vancomycin. Although similar study was conducted in milk products by Tripathi et al. (2015) in Jabalpur region and found that S. aureus isolates were sensitive to lincomycin and amikacin, resistant to amoxicillin and tetracycline. They also reported multiple drug resistance in some of isolates. Das and Mazumder (2016) studied the antibiotic susceptibility of 30 isolates of S. aureus from meat and found variably resistant to the antibiotics tested with maximum resistance for penicillin (73.33%) followed by erythromycin (36.66%), tetracycline (26.66%), oxacillin (23.33%), ciprofloxacin (16.66%), chloramphenicol (10%) and vancomycin (3.33%). Sasidharan et al. (2011) during a study in dairy products revealed resistance of few strains to methicillin, vancomycin and tetracycline and sensitivity to chloramphenicol, kanamicin. In another study, Sharma et al. (2011) examined 15 antimicrobial drugs and found that almost 80-90% isolates showed multiple drug resistant to majority of antimicrobial agents. Several isolates from milk samples were found resistant to amoxycillin+sulbactam, cloxacillin, erythromycin and kanamycin. They also reported various isolates were found susceptible to the ofloxacin, oxacillin, streptomycin, sulphafurazole and ciprofloxacin.

Sunitha et al. (2017) The S. aureus isolates were found highly sensitive to Chloramphenicol (93.10%), Cefuroxime (82.75%), Gentamicin (75.86%), Ciprofloxacin (75.86%), moderately sensitive to Erythromycin (48%) and found resistant to Methicillin, Vancomycin, Ampicillin, Amoxyclav, Co-trimoxazole and Tetracycline. Daka et al. (2012) had shown similar results with our study in drugs like penicillin group viz. amoxicillin, penicillin and oxacillin where they examined resistance between 40-71%. Besides, they also found the higher sensitivity to choloroquinolones drugs viz. erythromycin, vancomycin as 100%, 68% and 61.5%, respectively and for ceftriaxone, 71% also reported multidrug resistance problem. Rahimi et al. (2013) observed resistance of S. aureus against 14 antimicrobial drugs via disc diffusion technique and found that highest resistance for ampicillin (55%) followed by tetracycline (40%) and penicillin G (30%). They also found that 95% of isolates were resistant to one two antimicrobial agent and 45% isolates were resistant to three or more of drugs.

Most of the above mentioned study has shown similarity with the present study, while in case of few antimicrobials, the difference was observed with the present findings, this may be due to difference in the antimicrobial used for prophylactic and therapeutic purpose or as feed additive, as it is one of the main phenomena behind development of drug resistance in microbes. Multiple drug resistance pattern observed in this study may be due to increase in irrational consumption rate of antibiotics, transmission of resistant isolates between animals, human and environment. Self-medication, non-compliance with medication and sales of substandard drug in veterinary as well as in medical field.

The study suggests that antibiotic susceptibility assay of   chicken meat and meat products (ready-to-eat RTE chicken products) from slaughter house and retail outlets in the area were contaminated with antibiotic resistant strains S. aureus, of which in some strains multidrug resistance was also reported which is a matter of concern to consumer safety.

Authors are thankful to incharge head of department of VPH and Epidemiology; Dean COVS& A. H., Jabalpur, DRS, NDVSU, Jabalpur for providing laboratory and other facilities to conduct research work. 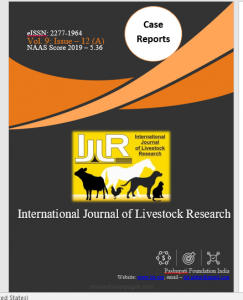 Recommendations of new journals should be routed by universities and colleges as follows:

This work is licensed under a Creative Commons Attribution-NonCommercial-ShareAlike 4.0 International License.